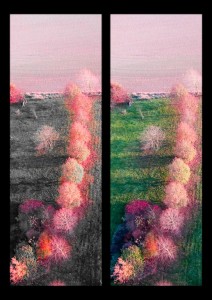 I am using a small Unmanned Aerial System Model (UAS-M) for Aerial Photography. The world looks different from above. Carrying a modified Canon allows automatic serial capture of images. The first test flight with the new folding frame was successful. The flight behaviour was excellent and the system would become back-pack transportable. A load test and camera flight was conducted after this initial test. After approx. 5 minutes of flight, height ca. 50 meter AGL, distance 100 meter control was lost. Several attempts were made to re-gain control but neither manual nor GPS controlled coming home did work. The platform kept hoovering slowly away. Hight control did still work but the platform was over a corn field and at this point in time an emergency landing in the field seemed not to be a viable option. However, instead following it on the ground, time was wasted with attempts to re-gain control. The platform kept moving away towards a wooded valley and sight was lost approx. 20 minutes after take off at a distance of ca. 800 meter.
The valley is covered by a dense forest with some meadows, a abandoned rail-road and a little river. A small road with not much traffic (5-10 vehicles / hour) leads through it.

When the sight to the UAS-model was lost, the actual position could only very roughly estimated. The tolerance could be a a couple of hundred meter in either direction with high trees, water and a steep hill. Furthermore it was nor clear if it came down immediately or kept flying for some minutes more.
At this time the chance to recover the UAS-model was close to zero. Neither the 5GHz video link nor the autonomous GPS/GSM tracking device, which could have reported the actual position through a telephone call/SMS were installed.
Dense woods and even a small river in the valley.
Nevertheless, we had to do ‘something’ and started the search by driving through the valley by car. Already after five minutes we were lucky to pick-up the signal from the telemetry downlink! We interpolated the closest distance / strongest signal by driving up and down the road and finding the mid-point between the points where the signal was getting weaker and got finally lost. Now we were again optimistic and – while stopping the car at the estimated closest point to the crash-zone of the UAS-M we already thought about some strategies for a systematic search considering the time left for battery power for the telemetry and also getting the ropes for recovering it from a tree.
Recovery
What than happened was a real surprise. While getting out of the car, we switched off the remote control. This forces (if not damaged) the UAS-M to switch on the loss-of-signal-warning beeper. And this was exactly what happened. We could hear the sound! The UAS-M had come down just two meter beside the road in the grass! Not on the road and not in the trees nearby! A almost perfect landing. Only damage: one broken boom!

Analysis
The post incident analysis showed the following: The rubber-studs on which the electronic components are mounted, failed and the complete electronics module with GPS, giros and accelerometer dis-integrated from the frame, leaving the module only connected by the electric wires to the battery and motors. Surprisingly this did not lead to an immediate crash. The UAS-model drifted out of range, the “GPS coming home on signal loss” did not work probably because the electronics part was freely moving. However, the height control was not affected, the platform stayed, controlled by barometric pressure, at the same flight level (over the valley at about 90m AGL) until the main power was insufficient to keep the UAS-M airborne. 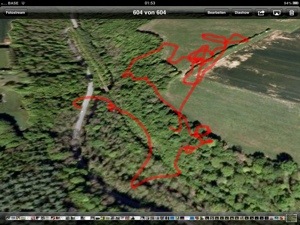